Tandem Social | The Confederation of Cooperatives of Catalonia recognizes the work of Tandem Social
16694
post-template-default,single,single-post,postid-16694,single-format-standard,cookies-not-set,ajax_fade,page_not_loaded,,qode-child-theme-ver-1.0.0,qode-theme-ver-12.1,qode-theme-bridge,wpb-js-composer js-comp-ver-6.1,vc_responsive 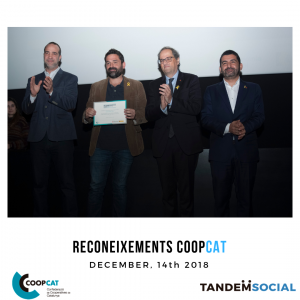 On December 14, the cooperative Tandem Social SCCL was given an award by the Confederation of Cooperatives of Catalonia in recognition of its transformative work in the promotion of cooperative principles in different strategic areas as well as for its work in social and cooperative entrepreneurship.

The event, chaired by the President of Catalonia, Quim Torra, was held at the Filmoteca de Catalunya with the attendance of 200 cooperative membres. Speeches were made by CoopCat’s president Guillem Llorens and the current Minister of Labour, Social Affairs and Families of Catalonia. Llorens defended cooperative organisations as a centuries-old social practice that, far from being out of date, look to the future in seeking organizational formulas to transform our society into one that is more equitable and more socially and ecologically just.

This site uses cookies in order to ensure a proper user experience to our visitors. By continuing to browse the site, you are agreeing to our use of cookies.AcceptCookies policy